In this article we will delve into the subject of knots. Not the one that uses ropes but the ones sailors use. Though the ones using ropes started off by being used by sailors and most knots have their origins as sailor’s knots. No, we will leave talking about knots to another day ... today we look at knots. Oh dear, there we go again. Ok, so before we continue, allow an explanation.

A knot (not the one with ropes) is a unit of speed.

This has been the gold standard for sailors probably ever since the first seafaring adventurers set sail on their boats to explore distant lands. With the vastness of the ocean and an unknown geography ahead of them, it was left largely to fate that someday in the not too distant future they would hit land and their adventure would come to an end ... at least for that voyage. And since most oceans and seas were uncharted, it was an exercise in guess work and a whole lot of luck to decide where exactly they were and in which direction they were headed. I suspect the promise of copious amounts of grog had something to do with their bravado!

We have heard about latitudes and longitudes. Those lines that divide the surface of the Earth into neat little sections. Once we know what our latitude and longitude is, we know almost to a couple of feet our exact location anywhere on the face of this Earth. In today’s day and age all we have to do is to flick out our smart phones, press a few buttons and voila, we know more than we probably would like to. Not so in the olden days (or indeed in the modern era) when you are venturing out into the vast emptiness of the oceans. Life is easier today for Captains of ships and aircraft with modern gadgetry like GPS systems. In the olden days, before anyone had even heard of the terms latitude and longitude, ships were sailing and for many it became their last voyage as they ended up getting lost at sea in their quest for glory and riches.

Of the two, calculating latitude was an earlier invention and that ended up helping seafarers a whole lot. As long as they kept on the same latitude, they pretty much knew what lay ahead. Except probably people like Christopher Columbus who did not even know that the Americas as a land mass lay between him and India, his targeted port of call.

As long as the Sun was out and the horizon was visible, latitude could be ascertained quite easily. Nautical sextants have been used forever for the purpose.

Ok, so we know what our latitude is. Now we need to know when we will reach where we are supposed to reach and for that we need to know our speed. Charts would have given near accurate distances between origin and destination and the routes in between. So, if one had to reach a particular location, one needed to know the two latitudes and the approximate duration it would take to reach there.

A knot is a measurement of speed, equating to one nautical mile per hour. And it was called the KNOT because actual knots were used on a length of rope to measure speed. Knots were made on a rope every 8 fathoms or 47 feet and three inches apart. At the end of the rope was a weighted piece of wood which was thrown into the water from the stern (that is the back of the ship, not where that couple was cavorting in TITANIC) of the ship. Due to the resistance of the wood against the water and the drag it created, the length of rope (with the knots) being released was pulled away from the hands of the sailor holding the length of rope. He did not force the rope loose, nor did he restrain it, he just let the rope do its thing – play out with the help of the pull from the piece of wood (called a chip) in the ocean waters. A second sailor let the rope ... and the knots ... pass through his fingers while a third sailor kept watch on a 30-second hour glass. The effort was to count how many knots passed through the fingers during the 30-second period. This number was logged and hence the name chiplog came about.

The number of knots that passed through the fingers within 30 seconds was the ship’s speed in nautical miles per hour.

Ok let’s try and make that simpler. Let us cut open the Earth down the center, from Pole to Pole – we have two semi circles. Divide this into 180 degrees, corresponding to the latitudes, from Pole to Pole. Each degree of latitude can be divided into 60 so-called minutes (this ‘minute’ is distance and not time). And each minute of that arc corresponds to one nautical mile.

If one travels 60 nautical miles, one would have traversed one entire degree. In metric terms, the distance between two degrees of latitude and two degrees of longitude (at the Equator) is approximately 111km.

A knot is not equivalent to a nautical mile, despite similar sounding semantics. It merely represents nautical miles per hour.

We referred to the knots being tied at a distance of 47 feet and 3 inches from each other. This was to convert nautical miles per hour to feet per second. It was much quicker to count the number of knots in a 30-second time frame compared to a one-hour one ... and an infinitely longer length of rope!

A lot has changed since the days of Christopher Columbus and Vasco da Gama. Today, a knot is measured by more precise instruments and the duration of calculation has been revised to 28 seconds instead of 30 seconds. There were different interpretations of the exact length of a nautical mile. For instance, the United States nautical mile was defined as 1,853.248 metres (6,080.20 US feet). The Imperial (UK) nautical mile, also known as the Admiralty mile, was 1,853.184 m (6,080 international feet). The international nautical mile was defined by the First International Extraordinary Hydrographic Conference, Monaco (1929) as exactly 1,852 metres or 6,076 feet. This is the only definition in widespread current use, and is the one accepted by the International Hydrographic Organization and by the International Bureau of Weights and Measures.

(This article would not have been possible without the inputs received from Bill Edwards, a maritime expert and a knowledge sharer of all things nautical. Thank you Bill. And thank you Alex Foster, yet another sea voyager, for requesting Bill for the inputs.) 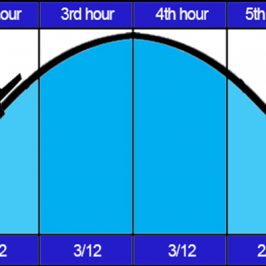